In 1965, the French Communist Party whose offices are scattered in Paris, decided to launch the construction of a new headquarters to accommodate its national leadership.

It is the Brazilian architect Oscar NIEMEYER, already famous for its architecture and avant-garde building in the capital of Brazil BRAZILIA is entrusted this task. Communist militant, itlived in France for several years, having fled the dictatorship that exists in his country.

He has performed in France the cultural center of the city of Le Havre said, “The Volcano”, the Bobigny Labor Exchange, or the former headquarters of Humanity in Saint-Denis.

“it is not the right angle that attracts me, nor the straight line, hard, inflexible, invented by man. Only I draw the free and sensual curve, the curve that I meet in the mountains of my Country, in the winding course of its rivers, in the clouds of the sky, in the body of the favorite woman.Curves is made the universe, the curved universe of Einstern.” Oscar Niemeyer

Surrounded by Jean Deroche, Paul Chemetov and Jean-Maur Lyonnet, Oscar Niemeyer graciously offered the headquarters lines to the French Communist Party and to the Parisians. The headquarters will be built in two stages, between 1969 and 1980.

The Espace Niemeyer is the embodiment in France of the exceptional creativity of the modernist movement in the 20th century. It is a demonstration of the technical possibilities offered by concrete, steel and glass that foreshadows the architecture of the 21st century.

Construction began in 1968 for the first section which includes the 6-storey building, the technical tower, the part of the plan hall, part of the 1st basement and the 2 levels of parking in the basement. The works stopped in 1971.

The second instalment will be made later, between 1978 and 1980. In the meantime, an old building remains unsanitary on the plot and this time allows the PCF to animate an important subscription crucial for the completion of the program.This second section is composed of the sloping Hall, part of the 1st basement, the dome and the entrance esplanade.

The building rests on 5 stilts whose foundations descend to 35m, is just over 26m high, 67m long and 11.5m wide.The restaurant’s 6th floor has now been transformed into an office floor. 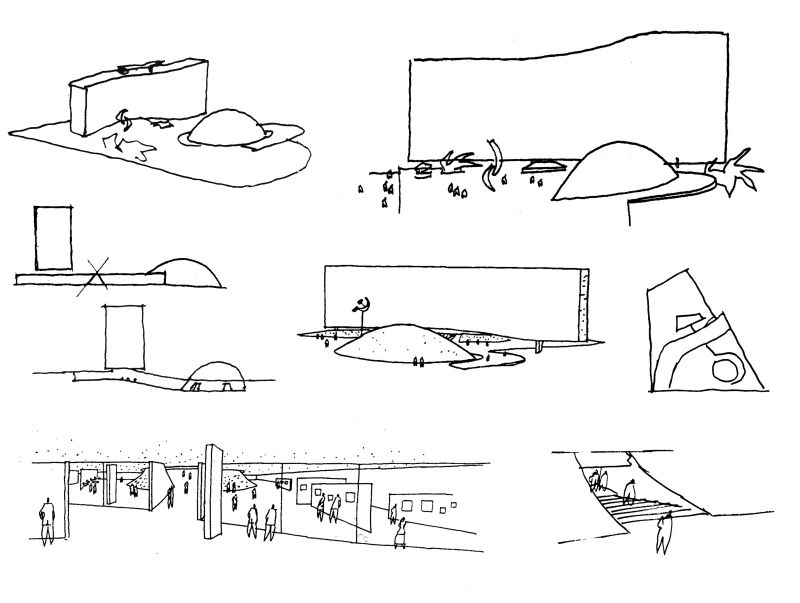 The hall should be seen as an architectural walk. The concrete curves (walls) as well as the other concrete elements (stairs, technical tower…) create different spaces visible only if one moves in this hall. These separate spaces are not closed and remain open to others. The continuity of this hall is fluid. The perimeter or spot lighting is similar to an undergrowth (clearing alley).

Ten skylights under the building along the dome allow to give a living side to this buried space. The shadows differ according to the time of day. The curves of its floor remind those of the esplanade. All these elements allow to say that the architecture of Niemeyer is sensual.

The dome, a conical concrete dome, ends with a spherical dome representing the fertile belly of a mother. The ionized aluminum slats ensure this room a decoration and a very beautiful acoustics by sound traps as well as a diffuse lighting. This room has 250 seats and its capacity can increase to 300. The furniture is designed by Niemeyer. Its radius is 11m and its height is also about 11m.

The headquarters has been classified in its entirety as national heritage since 26 March 2007.

This building contains the 5 principles of modern architecture described by LE CORBUSIER: 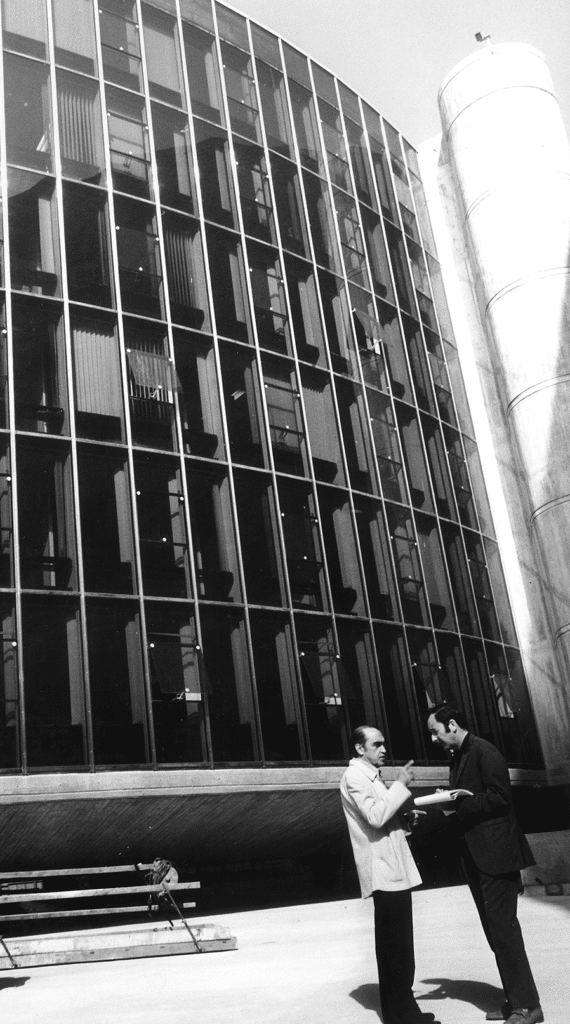 Born in 1907 in Lanjareijas, Brazil, he entered the National School of Fine Arts of Brazil in 1929 and graduated in 1935.

At the same time he became a pupil of Lucio Costa: architect and director of the National School of Fine Arts. In 1936, Lucio Costa and Le Corbusier were commissioned to carry out the ministry of education and health in Brazil with Oscar Niemeyer as a disciple.

In the early 1940s, Niemeyer, then a member of the Brazilian Communist Party, met Juscelino Kubtschek, a politician of progress and mayor of Belo Horizonte. In 1942, Kubitschek asked Niemeyer to build the Pampulha complex in the outskirts of Belo Horizonte, including the Church of St Francis of Assisi, the restaurant, the Yacht Club, the tennis club and the casino.

Becoming president of the Republic of Brazil in 1955, Kubitschek decides to entrust the construction of the new capital Brasilia to Lucio Costa for the realization of the urbanism and to Oscar Niemeyer for the construction of the state buildings of which the presidential palace, the two executive towers, the two domes of the Senate and the National Assembly, the ministries, the cathedral, the superquadra (housing district)…

In 1964 the military dictatorship in Brazil exiled him to Paris.

He met Jean Nicolas (French Communist architect) in 1965 who introduced him to Georges Gosnat (head of the administration of the Central Committee).

Georges GOSNAT: The project of a new headquarters goes back many years.

In his lifetime Maurice Thorez often talks about it with me and I would even say that he very much wanted to see this seat built at Mathurin Moreau which is one of the high places of the French and international workers’ movement. However, the company seemed difficult and expensive to us, which explains the hesitations we have often shown for a long time.

But things suddenly changed when Jean Nicolas introduced me to Oscar Niemeyer.With him everything became simple, if not cheap, even though our friend volunteered his assistance». 1971, the new critic.

The decision to entrust the construction of the new headquarters to Oscar Niemeyer was made in June 1966.